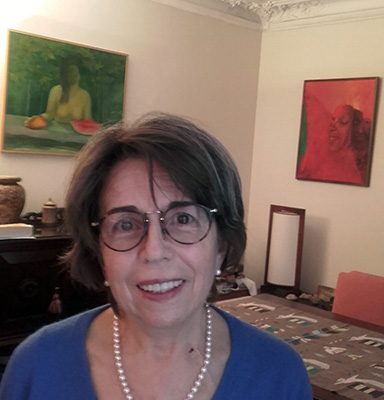 Martha was born in Tingo Maria (in the virgin Amazonian forests). A few months later her parents moved to Lima and not too long after that they settled in Arequipa, the second largest city in Peru.

Surrounded by volcanoes, Arequipa is called the “White City” because of the volcanic stones (sillar) of which the colonial houses are built. The intense light by which it is constantly bathed accentuates the whiteness of the stones, the blue skies and the ochre of the surrounding hills. These spaces, brilliant forms and distinct colours are always present in Martha’s work.

Drawn very early to pictorial art, Martha studied for a year at the School of Fine Arts before entering the National University of Saint Augustine in Arequipa to study architecture.

Circumstances in life led her to various cities in America where she continued to perfect her art (course on Anatomy for Artists at the State University of New York, Commercial Art at the Art Institute of Houston-Texas). Throughout her life, contact with other cultures (American, Mexican and Venezuelan) enriched her creativity.

Finally, she achieved her childhood dream and settled in Paris—her starting point to other worlds, other cultures (Eastern Europe, Central Asia, India…)—place where she has had free reign to realize her artistic creativity.

To define Martha’s art, one needs to see the symbolism behind each of her paintings. Every stroke, shape, colour and texture of her paintings serves to express her deeply engrained feelings and passions. The assurance of her stroke has developed largely as a result of her training in architecture and her extensive experience from doing portraits (by demand).

When Martha lets the paint slide on the paper, it dances. The colors overlap and mix together, all of which gives it the grace and the lightness of an arum-lily and at the same time the strength and gravity of an old woman’s face marked by years of struggle.
Colors are flavours to Martha: those of red peppers, chocolates, red fruits, lemons. And she often compares them to perfumes, too. The brilliance of the medium she uses, the strong contrast of colors between reds, yellows, ochre and blues, all reflect the influence of the landscapes of her youth.

The mastery of a technique, a precise drawing, a neat painting, these elements of her artwork allow Martha to fully express her sentiments and to transmit her passions and anger.

Martha began to combine poetry and painting in the year 2003. The play on words, their juxtaposition becomes a complement to her pictorial art. This allows him to go further in the expression of his feelings and his passions. His experience as a painter allowed him to organize a symbolic language, to write visual poetry. Words are colors, verbs are forms, poems are living pictures.

We can see it in his collections of poems:

Martha finds her inspiration in everyday life, but it is especially the relationship between people, their struggles, the games they play in society to be or appear to be, these are the subjects of her study. And thus it has become two major themes – Women and Masks – which are the object of many of her paintings.

When Martha paints Women in different situations in life, it is the deep sentiments in each one of them which appears in her canvases.

It is the woman in the competitive world who at times uses her femininity into believing that she can overcome the male domination.

It is the woman who wants to free herself, but who is also in charge of educating her children. She must transmit the respect of traditions to her daughters, thus perpetuating the links which hinder her.

It is thus the woman who delivers herself from her youth, or a woman who becomes bait or gets drawn into a perpetual spin, or a woman with unexpected charms. But it is also the woman who tears away at her roots, escapes from her world, turns her back to traditions, looks for a myth which collapses; that is the irony of exodus.

It is finally the woman who comes to the final term of her life, her face marked by years of difficulties, but appeased with piety like the last refuge.

The Masks painted by Martha are the theatre of everyday life. Each one of us depending on the circumstances plays a role and wears a mask to interpret the personage we want to represent. This mask is the being of what we would like to be. This mask also allows us to do things that we would not dare to do without its protection. But at the same time the mask is ambiguous. What does it hide?

When does one stop hiding behind the mask and reflect the personality that one has……. It is this game that Martha, through her gallery of masks, invites you to participate in as she carefully unravels the appearance from reality.

When Martha wants to distance herself from the world, she takes refuge in her secret garden filled with cala lilies. The cala lily is the flower associated with all the important events in Latin America—births, marriages, and deaths. Martha represents its true personality; from a bud to full bloom, from maturity to its final oxidation. Whether a single flower, a pair or a bouquet it dances, flies, joins together, and explodes on paper and canvas. With their single and fleshy petal shaped like a chalice, and its erect pistil, the arum lilies have become involuntary actresses in this sensual theatre.

Martha expresses her art by what she deeply feels and that which she wants to share with us, her fight against injustice and liberty for all. She also helps us to discover the aesthetic, to find beauty sometimes hidden in the smallest elements of nature, and which we no longer take the time to stop and admire.